The model trimming tool is part of the Orthodontic and Impression additional modules. It takes one or two aligned jaws acquired from the scanner and closes the jaw meshes with a trimmed base.

The tool is launched by clicking on the

button, in the Main Toolbar that appears when the project has at least one jaw mesh ready.

The interface of the Model Trimming tool is different from the rest of the software. On the top right, there are 4 tabs, one for every step of the process. The rest of the screen is either one or three 3D Views:

The procedure develops in 4 steps:

The positions of the jaw meshes, acquired from the scanner, may vary. This tool allows the user to adjust the position of the meshes with the aid of some commands.

All the movements (rotations and translations) are defined according to an Axis. The axis can be seen in the 3D views, on the bottom-left angle.

There's an additional option, Show Bases, that allows the user to see a preview of where the trimmed bases will be, in order to aid the positioning process. 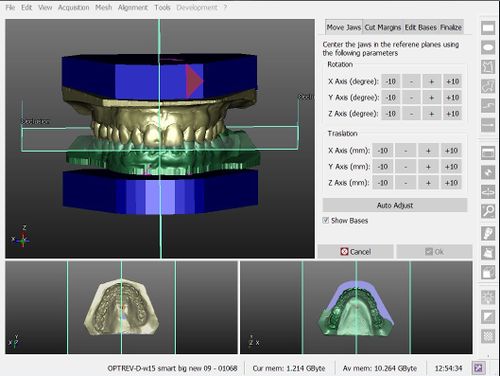 The jaw meshes acquired from the scanner often have residual unnecessary parts of information. This parts have to be removed before merging the data with the new trimmed base.

Fort his purpose, an interactive tool that can draw a line on the mesh surface is provided:

When the margin is defined, a click on the Cut button will remove all the parts of the mesh below the margin. 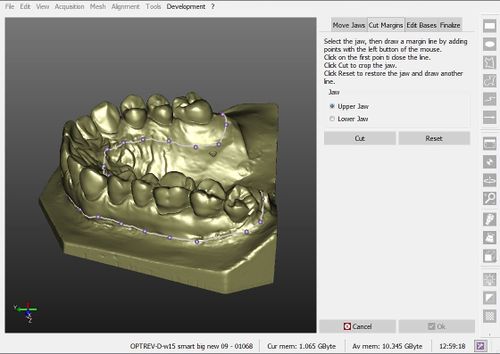 The user can change 4 different parameters of the bases. When a parameter is changed, the 3D view updates in approximately 2 seconds.

After the cut, the jaw meshes have to be completely fitted in the bases. If the bases are too small a warning message will appear below the parameters. 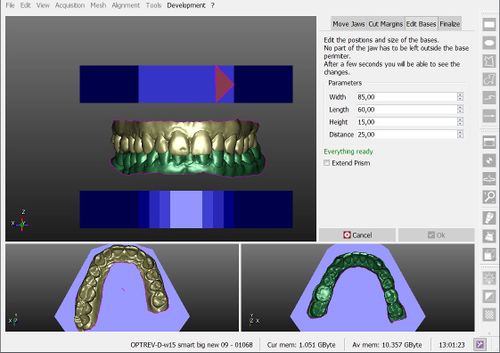 This last page shows only the Finalize button. When clicked, the software takes all the data and computes the new, closed, mesh. This process can take up to 2 minutes.

If the result is not satisfactory for the user, it is possible to return to one of the previous steps, change parameters and positions and then return to the Finalize step and compute the meshes again.

Otherwise, if the finalized mesh is satisfactory, click Ok to confirm the base trimming and save the new meshes. 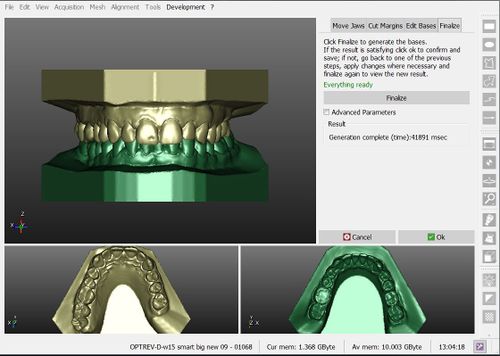